Good morning, everyone! Sorry I was MIA yesterday. The day just flew by and before I knew it, I was in my jammies. So we now have a lot of catching up to do. 🙂

Sunday I accomplished a 13 mile run. There we go, that is now out of the way.

Pre-run I fueled with two nuked eggs with some cheese and a banana. Silly Duke, you don’t even like bananas. 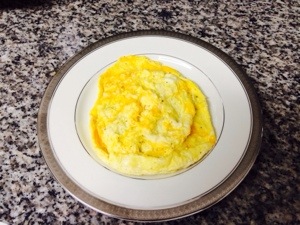 Since the Nike Women’s Marathon was running right along my usual route, I took advantage of the crowd control and headed out after I thought the bulk of the race was past. It was pretty foggy and cool, so in other words perfect running weather! The moon was setting right over Coit tower. Which of course meant it looked more spectacular in person than on iPhone camera. 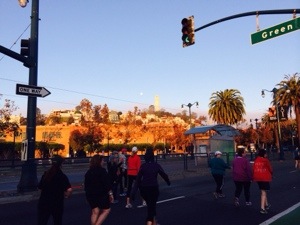 I ran mostly along the sidewalks next to the end of the race until I ran out of sidewalk then carefully made my way through the crowd. The plan was to run alongside the course until I needed to turn around, then figure out how to head back. Easier said than done. 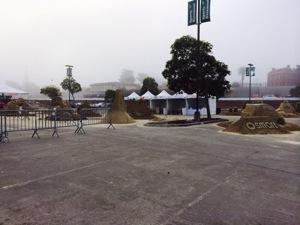 Oh, did you know there were giant sand sculptures in the Sports Basement parking lot? Me, neither.

Anyway, I managed to stay out of everyone’s way until we headed up the hill through the Presidio towards the Golden Gate Bridge. I found myself totally stuck in the racers walking up the hill, and frantically tried to get out and around the crowd. I feel a little guilty poaching the course, but I try to stay out of everyone’s way and I bring my own food/water, so the only thing I’m taking is the advantage of a closed course. Anyway, it was a wall of people and I felt bad taking up space. 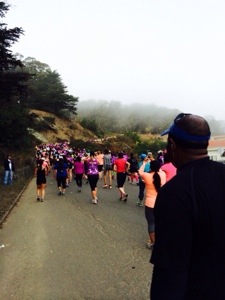 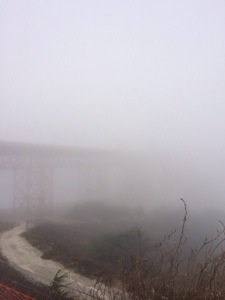 Then I perused the trails for a while. I HAD to try the trail that goes through the little tunnel.

Then I found the bay again and went through Crissy Field and the Marina back to the Embarcadero.

And then I ate a bunch. 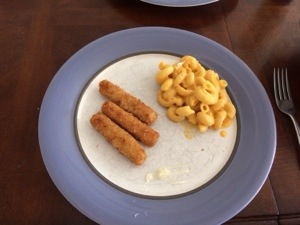 Immediate post-run two eggs and a rice cake with almond butter and coconut, a REAL Coke (thanks, Mom!) and a cookie, fish sticks and Annie’s mac-and-cheese (I started eating that before I remembered to take a picture). Oh yeah, my mom did the food run for the post-run goodies 🙂

And then there was Cheesecake Factory. 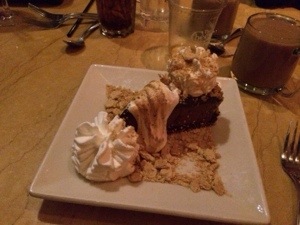 Squish helped me with my s’mores cheesecake.

Mom, Squish and I met up with Amanda and her boyfriend for dinner there. I had never been to the Cheesecake Factory and seized the opportunity. I had the salmon and salad for dinner prior to my cheesecake indiscretion, but I was distracted with Squish-wrangling and hunger to remember to take the picture.

2 thoughts on “13 Miles and Eat All the Things”