Thank you for the encouraging comments and feedback from yesterday’s post. It’s always interesting (and a bit scary) to see the reaction when you brain dump feelings on a post. Ugh, feelings.

Anyway, I figure the best way to get back on track is to start getting better at logging my choices. On this blog. So it’s public. Ugh, that vulnerability again. *shudder*

Okay, so, I snacked on 1/2 an avocado yesterday. And ate about 12 mini Snickers while prepping for a meeting that was going to kick my ass. Just a little stressed.

At least I’ve been consistent in packing lunches. I need to do another grocery run, so my salad wasn’t as crazy as it could have been. Lettuce, tuna, bell pepper, and a little leftover bacon from breakfast (I know, right?!? I had bacon leftover?) 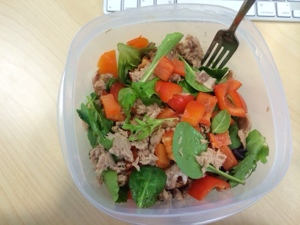 I ate it on the couch while Squish and I watched “Brave”. He would ask for bites and in between shoveling food in my mouth he would say, “More please! Ahhh!” and I would shovel food in his mouth. Like mother, like son.

Since I live in a part of the country not covered in ice and snow, I’ve been really making an effort to go on a walk every day after lunch. Hooray for green things.

Finally, I found this little gem on Pinterest the other day. I commute part of the way to work by bike. I used to bike commute in college, too, back in the Midwest. I am wondering if this is something that still happens in Nebraska or not. 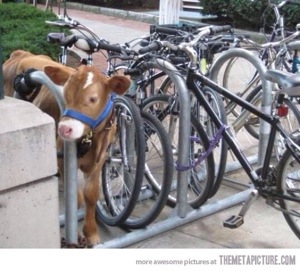