This weekend, like most of America, we celebrated Halloween over here.

Gramma made the kids’ costumes, as she is a professional costume designer and has all the sweet hookups to obtain authentic gear. Squish LOVED his “real” fireman uniform complete with boots and a tool belt. Buttercup was less enthused about having to put on her Dalmatian puppy suit, but once she was in it she was pretty snuggly. And it had a super long tail, all the better for chewing/drooling on. 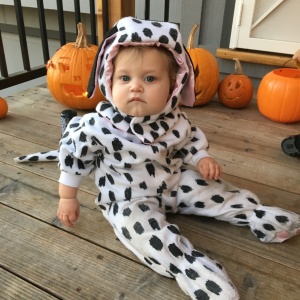 Squish came down with a touch of the flu on Thursday, so we had to skip out on a birthday party Friday night, and I wasn’t sure if trick-or-treating was on the agenda until Sunday afternoon when I was sure his mild fever wouldn’t be making a reappearance. He was a little slow, but still had a blast trick-or-treating with a pack of new neighborhood kids.

Or Auntie ‘Manda as a “Lazy Wizard”.

Sunday was my real birthday, but Squish’s flu had caught up to everyone else so it was a chill day. We went to brunch, then Amanda and I went out for some sister gossip and mani-pedis. Then while everyone was napping I went on a six mile hike out around Lake Chabot. It did not suck. 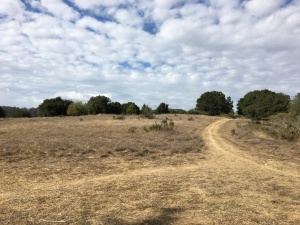 It’s been a while since I hiked that much, I think since our Alaska trip (which I’m still procrastinating on finishing the recap on. Only been two months, so whatever). Given that we are so close to some great day hike trails, I really need to take advantage of the great outdoors more often.

I’m pretty pumped about turning 33 this year. Normally I’m pretty “meh” about birthdays, but this year feels different. I’m pretty confident this is going to be a great year for me. Mostly because last week I decided that I was done with therapy. Yahoo! I’ve talked about it here and there, and I’ll probably put together an “ask-me-anything” type post on it one of these days, but I’ve been going to therapy for my postpartum depression since March. Lately I’ve felt that I have turned a corner, and decided to take the proverbial training wheels off and ride my own cognitive bike. While I may go back to therapy in the future if I need it, it feels pretty good to feel like I’ve made progress, and have the time and headspace to start working on other stuff now. Like blogging! And maybe exercise. Or I could do the laundry. The possibilities are endless!

That’s it for now. Go make it a great day!

One thought on “Another One In the Books”